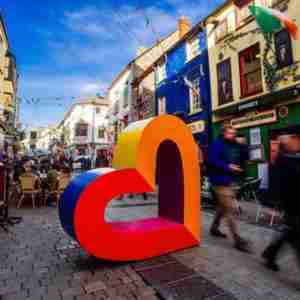 Galway 2020 European Capital of Culture, let the magic in.

This will be the largest and most complex cultural festival ever held on the island of Ireland. Starting on February 1st with a week of “fiery celebrations” around County Galway’s towns and villages, it will run for an entire year.

Galway has long been seen as a cultural hub, a place where people come for a week and stay for good, a place where artists are inspired and people find their place. Galway is extraordinary. Situated on the western edge of Europe, Galway is Ireland’s beating cultural heart. It’s a vibrant place, with creativity embedded deep in its DNA. This is a once-in-a-lifetime opportunity to showcase the best cultural programme that Galway has to offer, not just in Ireland, but throughout Europe and across the world. Events throughout the year will involve more than 1,900 events across 154 projects, 170 partnerships and collaborations with local, national, European and international artists and cultural organisations from more than 30 different countries.

For more info & for the full schedule visit: https://galway2020.ie